The Coolest Street Art in the Queen City 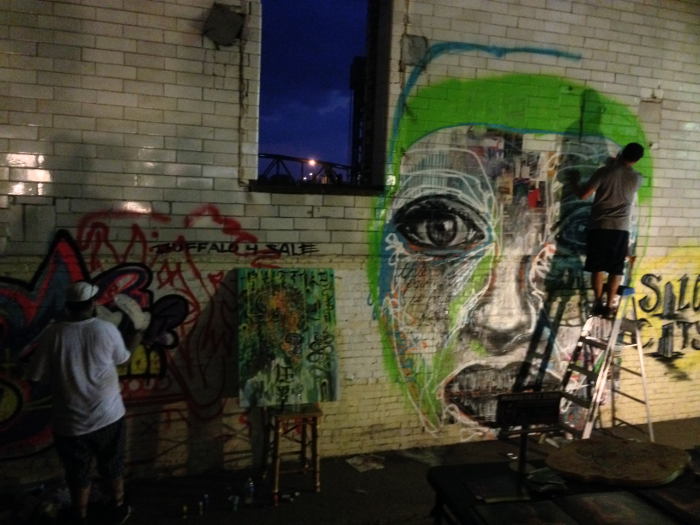 Every now and then we’ll be out somewhere and then BAM – there’s a super cool work of art right before our very eyes. Thanks to a plethora of art galleries, initiatives, and enthusiasts Buffalo’s art scene is on the rise and making our great city a more beautiful place to live in. Whether you’re looking to do a street art treasure hunt or want to admire some of the Queen City’s finest displays of creativity, get your cameras ready because there are some truly Instagram-worthy works up ahead:

Thanks to a group called the Allen Street Art Collective, the majority of buildings along this strip of Allen St. are colorfully decorated for all of our viewing pleasure. One mural in particular, “Tribute to Spain Rodriguez”, was done as a tribute to the late Buffalo-born comic artist by a collection of street artists under the direction of Ian DeBeer. There’s a lot going on in this mural and the whole piece was inspired by a Rodriguez comic about a fight he got into at a bar called the Jamestown (now Nietzsche’s) across the street.

Bonus: continue walking up and down the street to see more installments from the Allen Street Art Collective including “Hold Your Fire”, “Voyage”, and the quartet of murals located around all four sides of Allen Street Hardware Cafe: “The Revolution Begins Now”, “Iron Fireman”, “Tribute to Tony Goldman”, and “It’s About Time”. 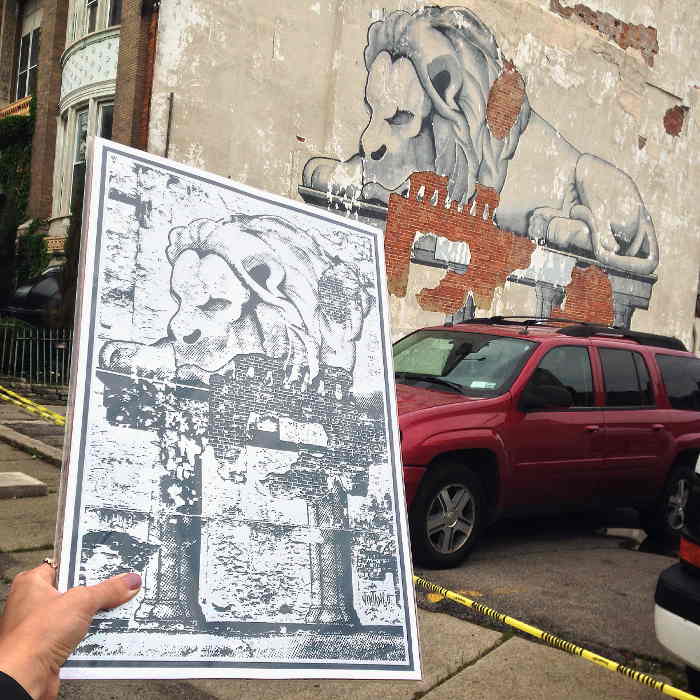 This mural was actually an advertisement from way back in the day and has become so iconic that every owner of the building since then has kept it as-is. The paint is chipped and fading in some spots and there’s exposed brick in others but all of that only adds to the coolness and history of it all. Local artist Vintango has a limited series he does using a screen print of a photograph he took of “Resting Lion” that you can snag at various art shows throughout the year and in his online shop – trust us it’s worth the $20. 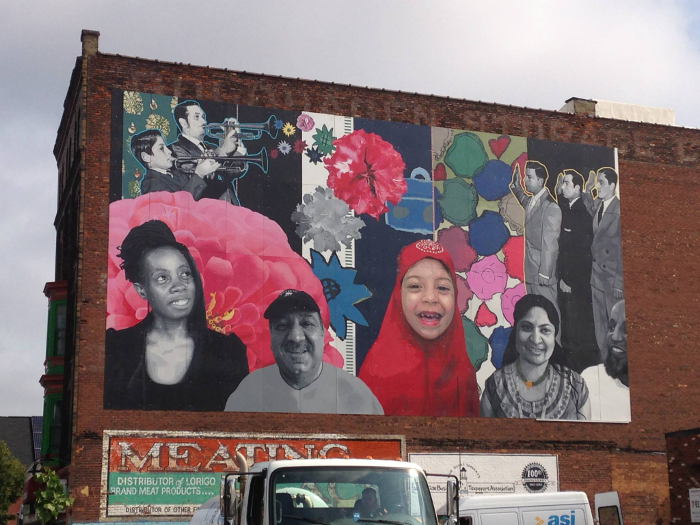 Standing at a remarkable 80-feet high “Grant Street Global Voices” is the result of a project by the Young Audiences of Western New York in collaboration with Buffalo State College, its Community Academic Center (CAC), and Grant Street business owners. Located on the side of Lorigo’s Meating Place, muralist Augustina Droze created the piece with the help of students from International School 45 and Lafayette High School. The project honors the voices of the young people from the growing immigrant and refugee communities on the West Side and captures the stories of the students’ families through photographic images of past and current residents. Once you’re done admiring this impressive work of art make sure to try some local ethnic cuisine from any of the dozens of places nearby, and make sure you come hungry. 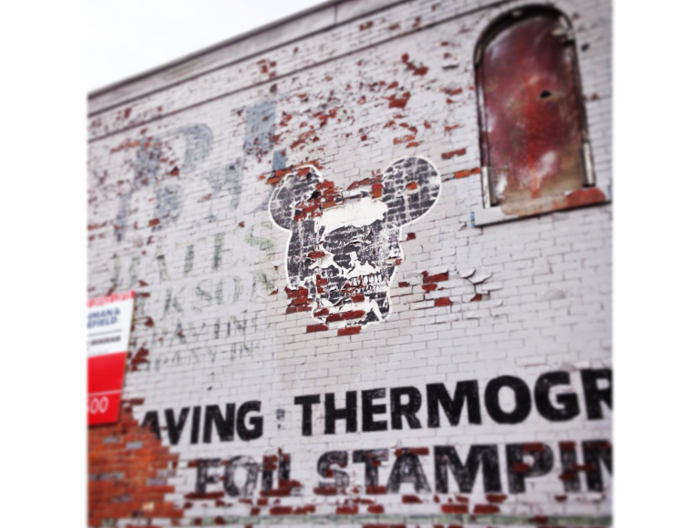 Chow Monstro is one of Buffalo’s most recognizable street artists, in terms of his work and his real-life beard of epic proportions. His trademark symbol is a skull with Mickey Mouse ears that can be found pasted on walls all over downtown and especially in Allentown. Some of the places you can spot these infamous Mickeys are 517 Washington St., the building in the parking lot at Elm and S. Division Streets (above), within “Conservative Government” at 505 Main St. (one of Monstro’s largest works), and inside the Allen Burger Venture (below) where you can find Johnny Chow himself behind the bar when he’s not on tour with Stone Sour. Coolest dude ever, check.

You’ve probably driven past “Freestyle Faces of Main Street” before, you just didn’t know its story. The brainchild of artists OGRE (Matthew Grote), Max Collins, and Chuck Tingley is one of downtown’s most recognizable works of street art. The mural is a fusion of all three artists’ styles, “with OGRE’s illustrative, cartoonish characters melting into Tingley’s more realistic portrait work and Collins’ wheatpasted photography of joyful neighborhood characters”. The piece, which has grown to the back of the building facing Washington Street, was meant as a tribute to the neighborhood and has proved to be a consistent draw for the growing arts and business district on the block. 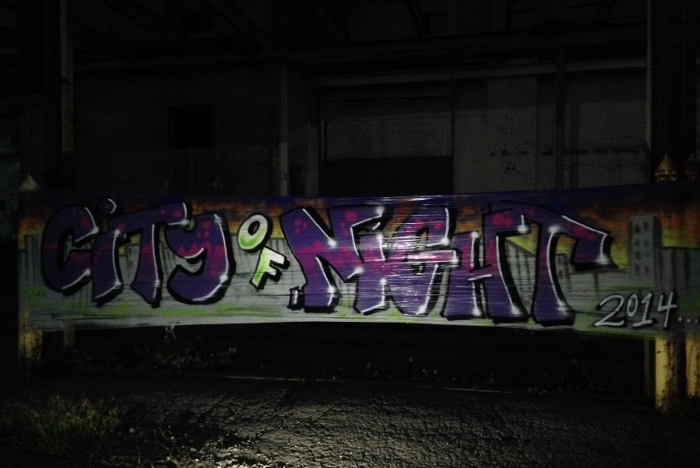 Thanks to the Emerging Leaders in the Arts Buffalo’s (ELAB) highly successful City of Night event you can now find one-of-a-kind works of art while exploring the grain elevators horizontally and vertically. For one night a year, City of Night allows artists to create art installations, interactive exhibits, murals, and more while onlookers watch each piece evolve from start to finish. After the event is over the murals remain on the walls of the abandoned Silos in a way that’s both beautiful and a bit eerie, and definitely a must-see.

If all this talk of art has you suddenly feeling inspired or with a hankerin’ for more art, check out Locust Street Art for free/low-cost classes for people of all ages in painting and drawing, hand-drawn animation, black & white film photography, and clay or take one of Explore Buffalo’s many different tours including Indoor Art, Outdoor Art, and Art of the Subway!

Lauren is the Creative Marketing Director at Step Out Buffalo aka the person who posts all those memes on social. A lover of Buffalo, food, travel, and animals, she can usually be found trying different local restaurants while planning her next adventure and asking passersby if she can pet their dog. Follow her dog-petting adventures on Instagram @laurenspoth
Find More ➭
×