The Mess Hall in Lackawanna is a collaboration between Joe Sergie of Mulberry Cafe in Lackawanna and the owners of South Buffalo’s Brick Over Bistro & Deli’s Charles Goodspeed and John Glavey. It is an interesting combination of two popular, south of the city eateries that focus on top notch comfort food in a homey pub-like atmosphere.  The Mess Hall continues in that same vain. It also continues their business concept of “build it and they will come” or maybe “keep it in the ‘hood.” If the food is good enough the people will find you, don’t worry about the location. The Mess Hall will certainly test the concept. The group is said to be working on a city version to open on Genesee sometime in the future… we think.

If you like good home-style food with a dash of creative upscale in a neighborhood diner/bar atmosphere then it doesn’t get much better than this. They have plenty of good beer too – bullseye! I’m a big fan of the come-as-you-are dining trend that serves up big time cooking.  This diner/bar could become a second home for those close enough to visit often – it’s the type of place that you don’t want to leave.[sc:Centerpost-1-700-150 ]

Comfort food all the way but with some interesting bobs and weaves, and wallet friendly to boot. Given the partnership it’s no surprise to find pizza, pasta and meatballs on the menu. Sadly, I have not had the opportunity to try the En-Doo-Ya pizza with jalapenos that Andrew G. swooned over in his review at the BN. You will also find Sergie’s famed (XXL) meatball here, but this menu is not a redo of the others.
They’ve got some Thin Crust Pizza (like Sunday Football- sausage, cherry peppers, caramelized onions, mushrooms and pepperoni $12.99), salads, sandwiches (like Cubano $8.99), burgers, pasta, and seafood. Plus, there are three Wolf Fitness approved items (like Blackened Salmon $16.99), and a “Share This Stuff” section (with Arancini $8.99, Mulberry Meatball $5.99, Stuffed Banana Pepper Tots $7.99).
As far as beer and wine is concerned, I counted 11 taps with one serving cider. They have a nice combination of local and not-so-local and another 10 or so in bottle including Not Your Father’s Root Beer. I counted about 18 wines of both red and white with some reasonably good options.

We stopped in on a busy Thursday evening. Downtown Lackawanna is not exactly a showplace of beauty, with the obvious exception of Our Lady of Victory Basilica, which makes up for a lot. The exterior of The Mess Hall fits right in. Inside is what one might expect based on the collaboration with some red walls and a hodge-podge of interesting photos adorning the walls. Chalk boards, maybe a beer sign, a couple TV’s and some subway tile finish off a look that seems just right. A garage door separates the dining area from the street, allowing patrons to spill outdoors when the weather permits.
We Ordered
Share This Stuff:

Deep fried cheese sticks with a nice cheese flavor and just a hint of spice. The piquillo pepper sauce was a perfect compliment.

Sounds a little strange…tastes awesome. Wayyy better than one might expect…or maybe not. A small dab of the horseradish-blue cheese dipping sauce (served on the side) and one bite into the crispy deep fried shell reveals the tender short rib eager to fill your mouth with a rich, juicy goodness. 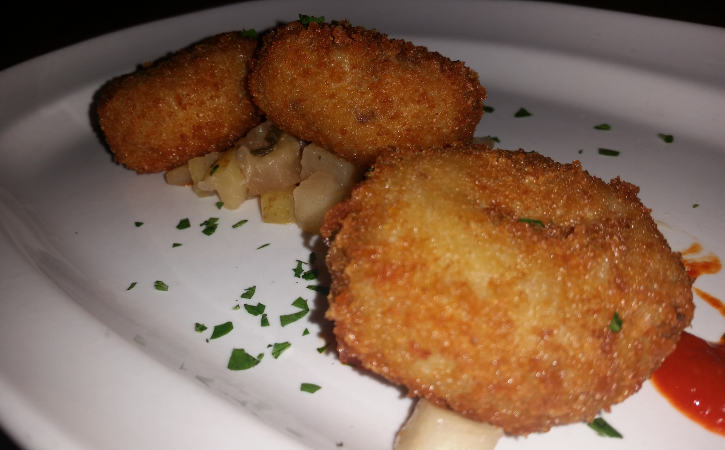 The name pretty much says it all except, yes, they are as good as you’d hope. Nice light dough around a deeply rich, indulgent meat that gives off a succulent broth. Love the onion too.

This is my first swing at a Turkey Stroganoff. I’m a huge fan of the beef variety, but I was a little hesitant about the turkey replacement. No need – massive chunks of turkey with tender mushrooms and grated cheese smothered a heaping plate full of the house made fettuccine. While it is simply a different dish with turkey, it was delicious never the less. The home-made egg fettuccine was outstanding.

I’ll admit just the idea of chicken and dumplings makes my mouth water. What could be better? Big chunks of chicken with carrots, —dumplings and a luscious gravy-like broth. Perfecto!

The desserts are hand-made especially for the Mess Hall. The cake was rich, creamy and delightful…as good as it looks.