If you hung out at old-school Buffalo coffee shops like Stimulance back in the 90s, you probably remember brightly-colored walls, the warbling of an open mic singer, the hiss of a milk steamer and getting your cafe latte in a random two-pound thrift store mug.

The new Tabernacle @ Sweet_ness 7 Cafe is an acid flashback to those heady days of caffeine and local counterculture.

At first glance, the trippy AF wall and ceiling murals in the new Tabernacle @ Sweet_ness 7 are just quirky works of art: But once you realize the story behind the murals, you realize they symbolize the power of trust and sacred bonds between two people.

Prish Moran and Jeremy Twiss may be cafe owner and employee respectively at Sweet_ness 7, but their relationship seems more like one between a mother and her son. The original intent for artwork in the café’s extension was to source graffiti art from a range of local artists. However, upon being shocked by the raw talent Twiss showed after given the chance to paint a small area, Moran gave him the green light to paint the entire space — despite having been one of her more ‘restless’ line cooks and not having formal training. 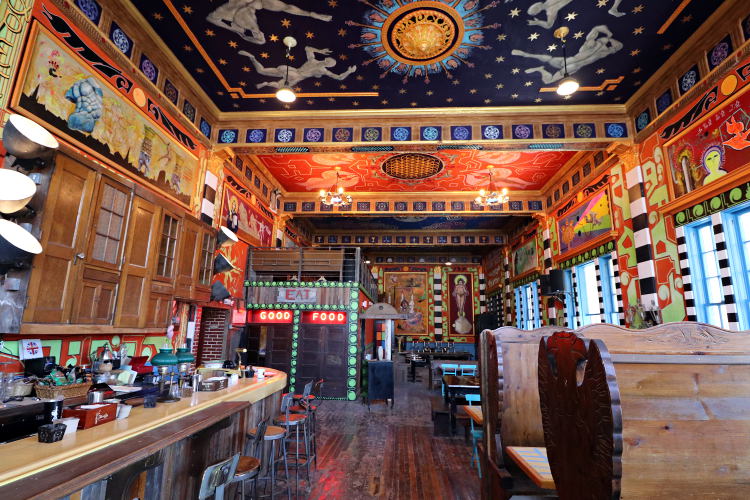 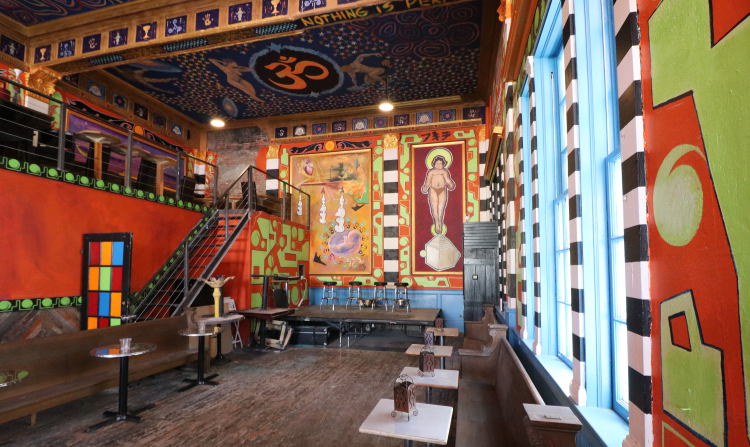 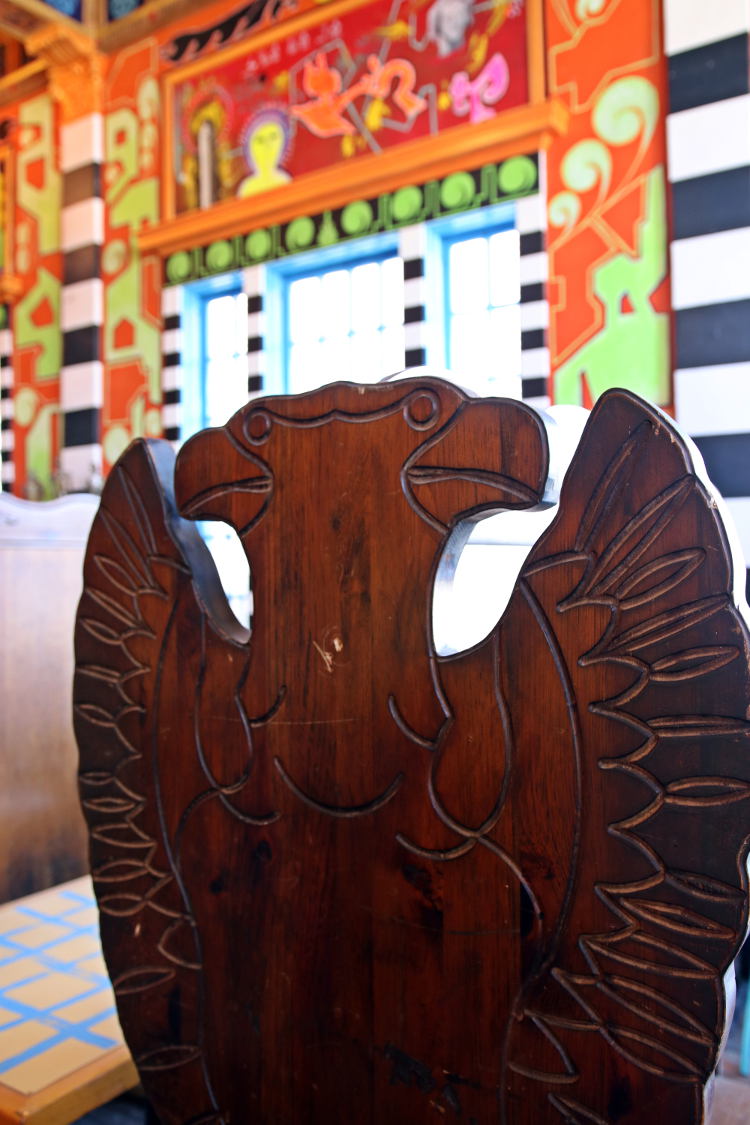 While she beamed about how the space turned out, Moran said she felt like a proud mom, particularly seeing how the work lit up a young man who had been irritable on the job.

Moran talked about how Twiss would spent sleepless nights laboring over colors, brushstrokes and thoughts that had popped into his head just that morning. Eventually, the rigors of being a modern-day, albeit amateur, Michelangelo started to show.

“I felt both guilt and pleasure both at the same time,” she said. “I would see him getting tired and I would feel so bad, but at the same time I was so happy with the work. And I told him that, we were very honest. At one point I was like, ‘Why don’t you take a break?’”

The result of nearly a year’s worth of hard, backbreaking work is a well-executed polyglot mish-mash of sacred imagery, with a odd interlopers sprinkled in; a sumo wrestler here, a dinosaur skeleton on a leash there. 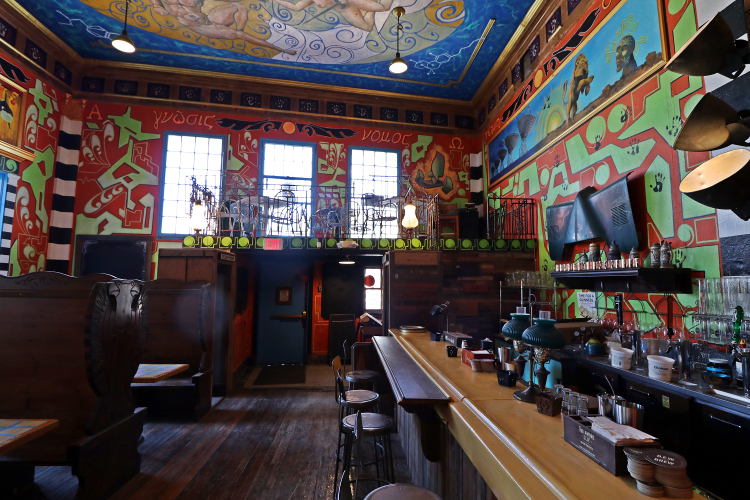 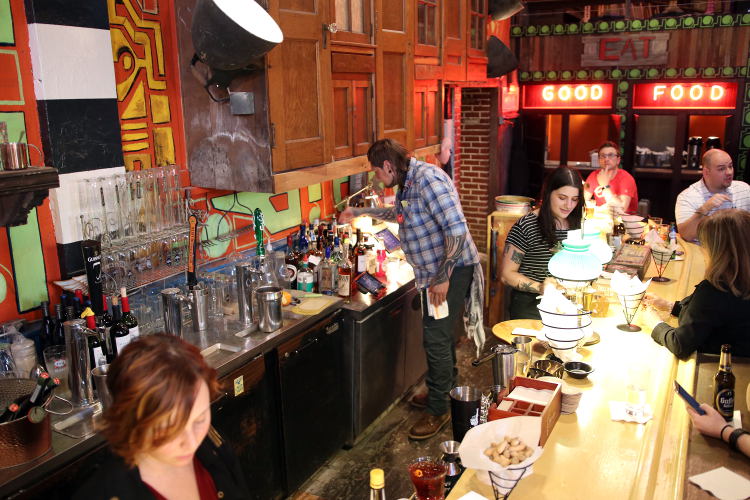 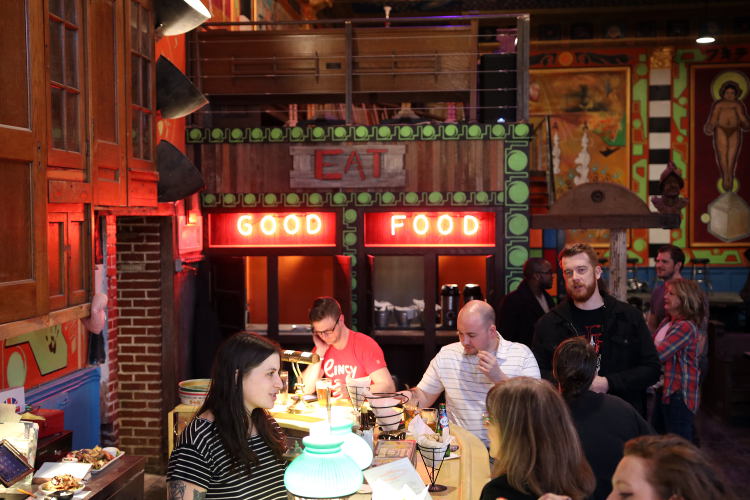 The axis between artist ‘son’ and business owner ‘mom’ is partly forged by their common tendency to improvise. Moran said she had “no end product in mind” when renovating the old place of worship behind the original Sweet_ness 7. Twiss, a self-taught painter, said the more profound mural images were inspired by books he was reading at the time, while the more whimsical bits are what fell into the slipstream of his daily thoughts.

Twiss said the entire work is meant to be ambiguous, and not some kind of statement.

“More than anything, I was worried about people judging my technical skill, not the content of what I was doing,” he said.

The Tabernacle is an extension of the Sweet_ness 7 Cafe, but with its own hours and menus. Murals and reclaimed fixtures give the new space a quirky, lived-in feel that doubles as a throwback to the old coffee shops of the 90s. 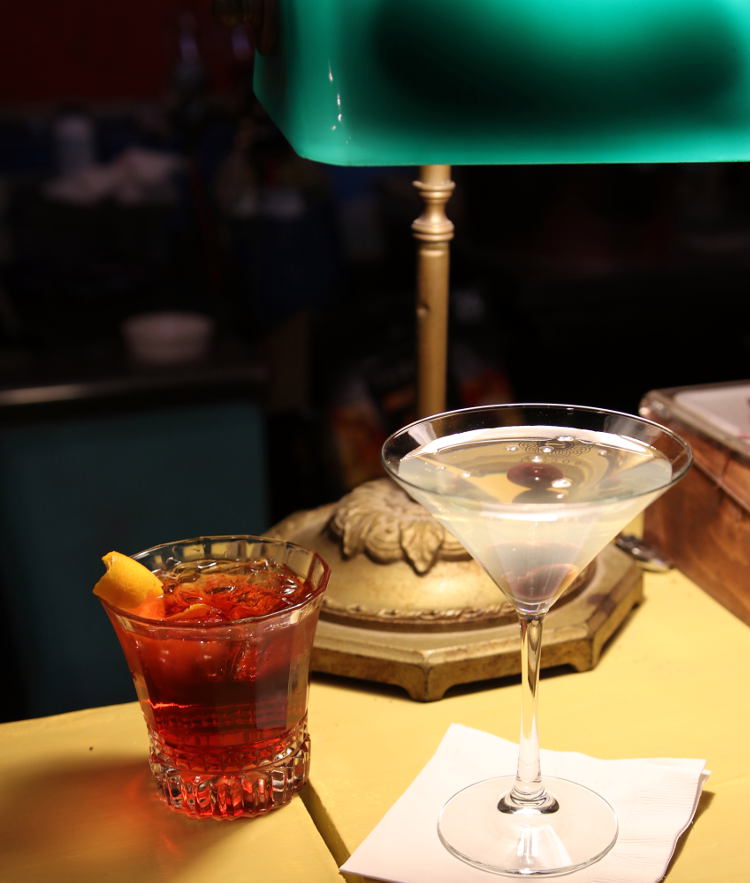 Family-friendly, with breakfast, lunch and dinner hours, the Tabernacle @ Sweet_ness 7 features food with influences that are just as varied as the artwork, from pulled pork to pierogi to three-cheese focaccia. Behind the bar, an opening day menu had craft beers, draft beers, a modest wine list and full range of liquors, with a big emphasis on the brown stuff.

The rear of The Tabernacle holds a choir loft and de facto stage area. Moran said they plan to play music from the internet at first and eventually start booking musical acts.

The Tabernacle is also the latest signpost on the road to an evolving Grant Street. While this part of the West Side isn’t exactly a bustling commercial strip or nightlife district just yet, it’s very friendly, safe and slowly transitioning into a thriving area.

“I have seven apartments upstairs, and they’re all upper-middle class professionals,” Moran said. “I thought I was going to get students, but right off the bat it turned out to be professors and people like that.”

That being said, it’s understandable some people might be worried about crime-related issues when coming over to see the amazing new space.

“Take an Uber, get dropped off at the front door and (when you leave) run back out to your Uber!” Moran suggested with a laugh.

Brett Llenos Smith is a freelance writer based in Buffalo’s Allentown neighborhood who has been covering local food and culture for Step Out Buffalo over the past six years. As someone with a multi-ethnic background, he has a passion for exploring and understand the many diverse corners of Western New York.
Find More ➭ New Restaurants 2018, Step Out College