Photo Courtesy of The Darwin House

Our treasured architectural gem, The Darwin Martin House, recently made national news when it was featured in The Post. Arguably WNY’s most famous Frank Lloyd Wright masterpiece is located in the middle of the historic Parkside neighborhood and recently completed a major renovation.

The House has been undergoing an extensive restoration project for nearly 20 years. Its long-awaited completion finally came this year and The Washington Post was pretty impressed to say the least. 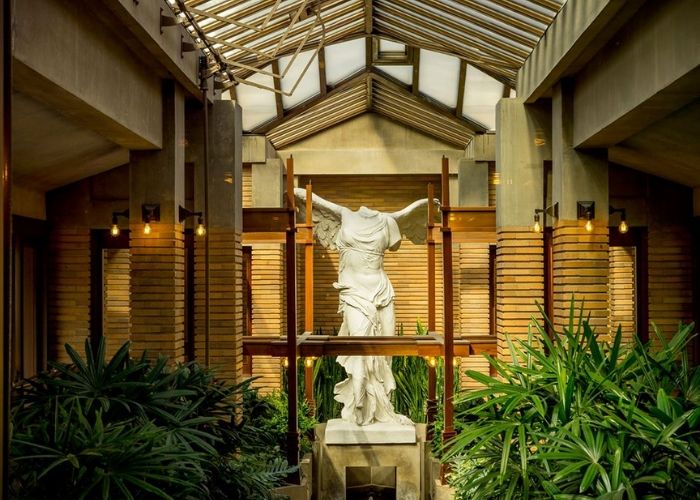 Photo Courtesy of The Darwin House

Art and architecture critic Phillip Kennicott says in the article,

“The sightline to the pergola terminates in a plaster reproduction of the Nike of Samothrace, a bit of visual hyperbole that makes you wonder and smile at Wright’s characteristic ability to finesse architectural drama just to the point of being bombastic. The house, like other Prairie houses of the period (Wright worked on the Martin House complex from 1903 to 1907), is entered through a door approached not head-on, but from the side, compelling a left turn that unveils the interior as a sudden flash of perception. From the moment you enter the house, the view toward Nike in the distance is dramatized by a crescendo of light, dim in the immediate foreground, brighter along the pergola and radiant — if the weather permits — in the glass-enclosed pergola that houses the white statue. The statue reproduction commands this domestic space as forcefully as the Hellenistic original commands the great staircase at the Louvre.”

Kennicott also says of The Martin House, “From the outside, the Martin House is impressive, but not overwhelming. Despite its vast volumes of interior space, it hugs the ground and keeps a low, contained profile. From the inside, however, it suggests the scale of a grand country estate. And that was Wright’s intent, which is played out as much in the urban design of the space as it is in the house itself.”

Well, aren’t we lucky to have this beauty right in our very own city! Interested in hearing more about what others have to say? This isn’t the first time Frank Lloyd Wright’s works in Buffalo have made national news. You can check out what Architectural Digest has to say here. While it is closed due to the current pandemic, this will definitely be a must see tour once it reopens.

Read the full article from The Washington Post here