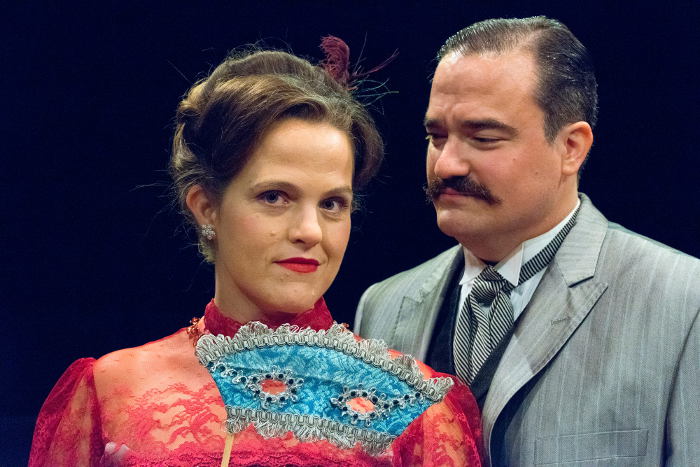 Now that the theatre season is in full swing, the first set of reviews have hit the circuit, and folks have returned for good from their summer vacation spots, it’s time to plan out the next few month’s theatrical getaways. Nothing helps a person cope with the oncoming cold than the prospect of a diverse and enthralling show schedule, but with more than twenty different theatre companies to choose from, it can be an overwhelming experience just sifting through the many choices in stock.

And that’s where I come in!

Like any Top Ten list, this is going to be influenced by my personal taste, which may not coincide with the general theatergoing palate, but I intend to describe in objective terms why each selection belongs on the list, and hopefully those words will convince you the reader that they belong on the list and in your calendar as well!

As the winner of four Tony Awards in 2008 when this show first appeared on Broadway, In the Heights is a unique musical that blends rap, salsa rhythms and Latin pop music sounds with the storytelling quality of show tunes. In the Heights takes place in a mainly Dominican-American neighborhood in New York City’s Washington Heights and features a familiar set of characters who dream, struggle and love in the midst of hardship.

What makes this show a must-see is the diversity it adds to the Buffalo musical season with its intensely contemporary feel and culturally relevant content. Musicalfare is shaking things up with its programming and it’s definitely worth supporting!

While A Little Night Music is over forty years old, the classic romantic comedy with music and lyrics by Stephen Sondheim doesn’t feel that way. Set in Norway at the turn of the century in midsummer, when the sun never makes it below the horizon, lusty stage actress Desiree Armfelt makes her way back to her hometown where aging mother, loving daughter, and confused current and ex-lovers await.

Whimsical, witty and featuring the jazz standard “Send in the Clowns,” A Little Night Music is simply timeless. Sondheim’s works are difficult to pull off and therefore hard to come by, and it is rarer still to find a company that can rise to the occasion. In its 25th season, Irish Classical Theatre is sure to provide a refreshing look at this mesmerizing musical.

Nothing gets a person in the autumnal spirit like a good spooky story, and the one of Icabod Crane and his run-in with a dismembered equestrian is as certain to spook as entertain in this production for all ages. If you haven’t revisited the legend of Sleepy Hollow since the Disney short and the terrible Johnny Depp version, here’s the perfect opportunity! Lanky schoolmaster Icabod Crane has fallen under the spell of a rich farmer’s daughter, Katrina, along with the village beefsteak Brom Bones. At Katrina’s harvest party, Brom Bones tells the tale of the Headless Horseman, foretelling the danger in store for Icabod on his lonely walk home!

The Theatre of Youth takes care to create high-quality, imaginative performances that engage the whole family, so why not complete your apple-picking, pumpkin-carving weekends with a trip to the theatre?!

This brand-spanking-new play earned an extended run in its world-premiere performance earlier this year at Island City Stage in Fort Lauderdale, Florida. Written by Michael McKeever, it delves into the relationship of a gay couple, one of whom wants desperately to get married while the other doesn’t believe in gay marriage.

Touching, serious, and humorous at times, this is just the sort of play Buffalo United Artists pulls off perfectly every time. With a well-established company like BUA producing an extremely new and highly relevant play comes an exciting performance synergy well worth pursuing in your theatre excursions.

Asher Lev is a young Jewish painter who finds himself torn between his Hassidic faith and his artistic passion. As family, tradition and religion call on this prodigy to call it quits, Asher Lev is left to make the ultimate choice between the one life or the other. This powerful play is an adaptation of the modern classic by author Chaim Potok.

Why you should see it here at JRT? Not only do they have a reputation of producing excellent work with fine actors, Chaim Potok’s wife, Adena Potok is coming from 10/20-10/22 to help present the work and provide a background context for the work! It is always an amazing opportunity when the audience can hear from the creative side of a play, and JRT does regular talkbacks with educational programs like Adena’s talk!

If you ever happened to end up in a drama class in high school or college, it is very likely you are at least vaguely familiar with the childlike but independently driven housewife called Nora and her condescending, controlling husband Torvald of Ibsen’s classic modern play A Doll’s House. At the time it was written, this story was revolutionary in its depiction of, gasp!, a woman who made a bold decision in a patriarchal marriage in the mid-19th century. About one hundred years later, Ingmar Bergman adapted the story to a stripped-down five-person performance which exaggerates the confrontations between Nora and the other characters.

And what you’ll see at Torn Space? You can never be sure what exactly you’ll find in wait at the experimental theater company’s next show, but it is always certain to enervate the senses by incorporating stunning visual elements. A ticket to a Torn Space Theatre show is a pass into a dimension of the imagination every time. Their work is not for the weak of mind, it challenges and explores, so it is especially exciting to see a play so classic and seemingly well-known in the hands of the avant garde.

Quite on the opposite side of the performance spectrum, though equally rewarding, is Harvey, the 1945 play by Mary Chase. It was famously adapted for film with Jimmy Stewart starring as the main character, who causes a fuss when he claims to have befriended an invisible six-foot rabbit named Harvey.

This classic comedy is quirky and heartwarming, though it deals with the dark questions of insanity and perception. Elwood, the main character, is perfectly content to believe his vision, but his sister and everyone else around him is alarmed and set to commit him to the sanitarium. The New Phoenix cast stars local favorite Richard Lambert as Elwood, who has a bit of Jimmy Stewart’s lovable nature and is sure to stand out in this timeless play.

Not only is My Fair Lady one of the finest musicals ever penned, it is based on one of the finest plays ever penned in the English language, Pygmalion, by Bernard Shaw! Not only are its characters brilliant, hilarious and sensitive, but the songs they sing perfectly capture each note and nuance of their personalities! And not only is it rare to see a professional production of this Lerner and Loewe classic… Okay okay, My Fair Lady happens to be my very favorite musical of all time, but I am not alone in this one! The New York Times called the original production “a perfect musical.” It is the same production that earned Julie Andrews her first Tony Award nomination in the leading role of Eliza Doolittle. It is the show that brought the American songbook “Wouldn’t It be Loverly?” and “On the Street Where You Live,” for heaven’s sake!

The better question here is, “Why wouldn’t you see it?” The Lancaster Opera House is committed to putting classic, large-scale American musicals on stage in a time when many theatre companies do not have the resources to devote to all that choreography, pit orchestra, large cast, and intricate scenography stuff that these kinds of shows normally require. It is a gift to have a quality production of a “perfect” musical to look forward to later this fall, so take advantage of it!

Hopefully these insights to a very few of the dozens of show opportunities that the Buffalo theatre community has to offer will help you choose a few to include in your busy cultural schedule. For a continuously updated list of currently-running shows, and a host of theatre-related resources, visit www.theatreallianceofbuffalo.com.