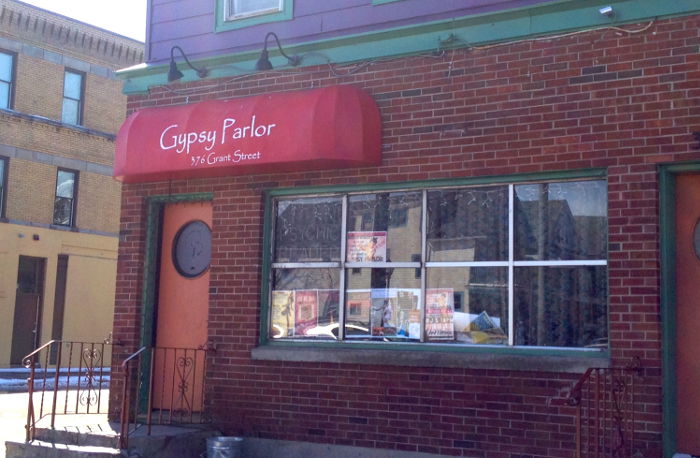 Buffalo’s music scene is a multi-faceted beast with many vibrant and animated heads, all culminating in a cultural and genre bending melting pot. The city is home to some dedicated, creative entertainers, and has produced numerous platforms for such characters to perform on. While some classic old haunts have fallen into the shadows during the past few years, others have risen up to take their place.

Showplace Theater was one of those wounded soldiers known until recently. It has been renovated in what must have been a time-consuming and money-gobbling project. The building dates back to around 1908, and what was once a classic theater ended up being a music venue for local as well as touring acts in Buffalo, featuring punk, metal, rock, and rap shows. The building was closed down around 2007, and remained dormant until work began two years ago. As of the date of this article, the doors have not been permanently reopened, but it is well worth keeping your eye on this hidden gem, buried in the rough of Grant.

Speaking of Grant, the newly opened Gypsy Parlor is another necessary stop for music lovers on their trek, especially if they have an exquisite taste for atmosphere and décor. Dressed up in curtains, red flowery lights and wall-to-wall portraits straight out of the early twentieth century, Gypsy Parlor truly sets the scene for a night of off-the-wall entertainment. They have a wide selection of craft beers, and the drink menu also includes specialty cocktails with such names as “Gypsy Juice,” and “Love Potion No 9.” Local indie bands usually provide the auditory accompaniment, which runs the gamut from jazz and acoustic, to freak rock. It’s worth mentioning that they have B-movie theme nights.

The Waiting Room reared its head early in 2013, during the absence that followed the closing of Buffalo’s infamous Mohawk Place. Chris Ring of After Dark Entertainment came together with Donny Kutzbach who runs the Town Ballroom and Funtime Presents, and the two decided to create a new home for bands that found themselves lost among crippled venues. The room is spacious, and its walls are decorated with a collage inspired by Buffalo music history. It can fit around 450 people. The main stage is formidable, and there is a bonus “Songwriter’s Stage” towards the front of the establishment with the purpose of creating an intimacy with the audience. The venue began by hosting mainly punk and metal shows, but has since expanded to a wider variety of music, hosting local and touring bands alike.

Our journey now takes us to Allentown, which is arguably the epicenter of the local music scene. Nietzsche’s is legendary in this circle, and has hosted such Buffalo music legends as the Goo-Goo Dolls and 10000 Maniacs. It’s a fairly Bohemian setting, with odd accouterments and curious paraphernalia hanging from the walls and ceiling. Two upper balconies flank the red curtained main stage, and they come in handy in terms of space and view. There are performances across the bar in the front room as well, occasionally utilizing the house piano and creating an almost saloon type feel. Worth mentioning are the open mic nights that occur every Monday, where aspiring musicians, poets and other performers can sign up in order to try out new things and hone their craft in front of an audience. The bar also features a wide selection of delicious beverages, but it is cash only, so don’t say you weren’t warned.

Otherwise known as DBGB’s, Duke’s features what may be the most eclectic variety of music genres in the scene. From electronic to hip-hop, to jazz, punk and everything in between, the variety of acts that grace the stage is tremendous. The place is also popular among DJ’s. DBGB’s also has one of the biggest beer selections around, featuring somewhere over 157 different types of beer. They also have a kitchen that boasts a generous menu with options for all tastes. There is a dining area between the bar and the stage, red mood light candles, and in the summer they open a well-kept patio in the back.

Hidden on an inconspicuous corner of Franklin St, Tudor Lounge is one of the best places to get a taste of local color, and a healthy sample of local music. The stage is set to your immediate left as you enter, and can be viewed from almost anywhere in the bar, even if you decide to tuck away into a game of billiards. The prices are reasonable, and the best night to check out their scene would be Thursday.

Referred to as Buffalo’s ‘best sounding hall,’ the Tralf has been a staple in the scene for years. Tucked away among the many establishments of Buffalo’s theater district, the Tralf boasts great acoustics, variety, and cleanliness. It also has a good amount of space on the dance floor.

Established in 1985, Sportsmen’s boasts a warm, cozy atmosphere as well as amiable service. It’s a “barn-style” bar, with an upper level that is rather advantageous for viewing performers on the stage below. Music of all kinds are featured there, but it is made home by primarily Americana, singer-songwriter entertainers. They feature live concerts on a more frequent basis than most places, and always provide music lovers with a comfortable setting from which to take in the performances.

Rescued and renovated by local music legend Ani DiFranco, the church now known as Babeville has become a structure completely dedicated to the arts. Concerts are held in both Asbury Hall, and the Ninth Ward. Asbury Hall is an open floor, 450-foot ceiling hall with profound acoustics and beautiful surroundings. The Ninth Ward is an underground venue for smaller acts, but it is no ordinary basement. The subterranean section of the building is just as visually appealing and majestic as it’s upper levels.

A bit off the beaten path from other venues, but still most definitely alive in the music scene, is The Forvm. Located in the same plaza as the Amherst AMC, the place boasts an assortment of different acts, both local and national. The service is very accommodating, and the beer assortment is vast. It is part of the same building as a place called The Library, whose menu boasts a burger called “The Beowolf” and is a must try. There is plenty of seating available for those that wish to relax and enjoy the show from a distance, as well as room in front of the stage for anyone who wants to get up close and personal on the action.

Located close to UB’s south campus, Broadway Joe’s frequently puts on punk shows and is also known for industrial/EDM dance nights. Punk N’ Tots is a bi-monthly event that is held there, involving local bands across the spectrum of punk, as well as tater tots. They also have a back patio area that is open all year round and is rather expansive.

Any list of Buffalo music venues would be remiss without a mention of its historical Town Ballroom. Larger than the majority of venues in the area bur smaller than the First Niagara Center, the Ballroom is a cultural mecca for local bands. The place was originally called the Town Casino, and featured performances by such legends as Frank Sinatra and Bobby Darin. It wasn’t until 2005 that the building was completely restored to the status of a legendary music venue. Many popular and famous touring acts are featured there, but local bands take the stage as well, making the place well rounded and colorful in terms of entertainment.