Tour by Car: 10 Stop Driving Tour of Allentown & The West Side 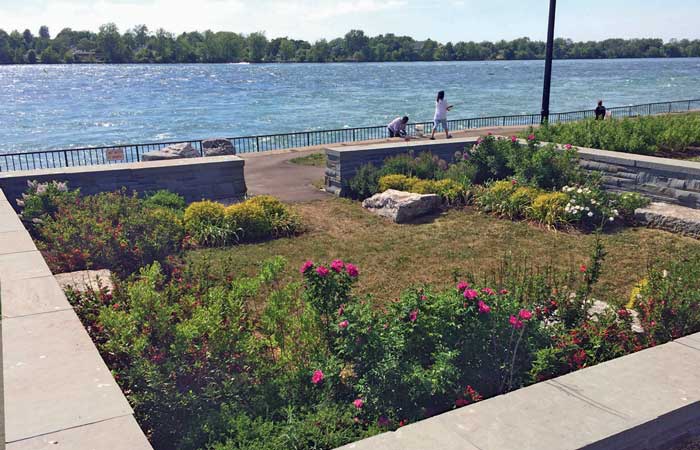 It’s finally springtime here in Western New York, but amidst the outbreak of COVID-19, warm weather activities certainly look a little different than usual. (Anyone else savoring every last minute of their one walk a day?) If you’re going a little stir-crazy inside right now, trust us, you’re not alone.

While it’s true that our daily norms have drastically changed, we think there are still some great ways to (safely) spend time exploring the city— which is why we’ve put together a  Tour By Car Series for you to enjoy!

Each post will feature a “driving tour” itinerary chock full of interesting spots around the city that you can enjoy from the comfort of your own vehicle or outside while maintaining a safe social distance from others. From historic landmarks and architectural gems to street art masterpieces and popular restaurants offering takeout, we hope that these guides will help provide you with some inspiration in light of all that’s going on right now, and if nothing else, a fun distraction for a few hours.

And this goes without saying, but we’ll say it anyway: please continue to listen to local and national public health officials, maintain proper social distancing when necessary, and only do what you currently feel comfortable with amidst the outbreak of COVID-19. We’re all in this together, Buffalo!

Pre-Trip: Stock Up on the Essentials

Before you get on the road, you’ll want to grab your favorite “road trip” drink to fuel you. Feel free to take care of this step at home if that’s your jam, but in the interest of supporting local businesses during COVID-19, here’s a quick list of local coffee shops taking to-go orders right now that are fairly accessible on the way to the first stop on our list (depending on wherever you start from, of course).

Pick up a morning/afternoon caffeine boost, and maybe a tasty treat to go with it!

We’ll officially kick off our driving tour at 1330 Niagara Street, where the massive “1800s Bikes in Vines” mural can be found. Completed last year as a part of Albright Knox’s Public Art Initiative, the mural was created by local artist Nicole Cherry, and draws inspiration from both the building’s occupant, a bike shop, and bicyclists brought to the West Side by the area’s new bike lanes.

To get to our second stop, we’ll head down Niagara Street and over to Broderick Park, a small, but beautiful riverfront park on the West Side that’s packed with history. Positioned right along the Niagara River, the park is regarded among historians as a hotspot on what was once Western New York’s portion of the Underground Railroad, likely due to its close proximity to the United States/Canadian border.

Today, a walk through Broderick Park doesn’t just give way to a pretty view of the Peace Bridge. You’ll also find a plaque at the park’s entrance that pays tribute to the park’s historical context, and the men and women that crossed the water from that point to seek freedom in Canada. 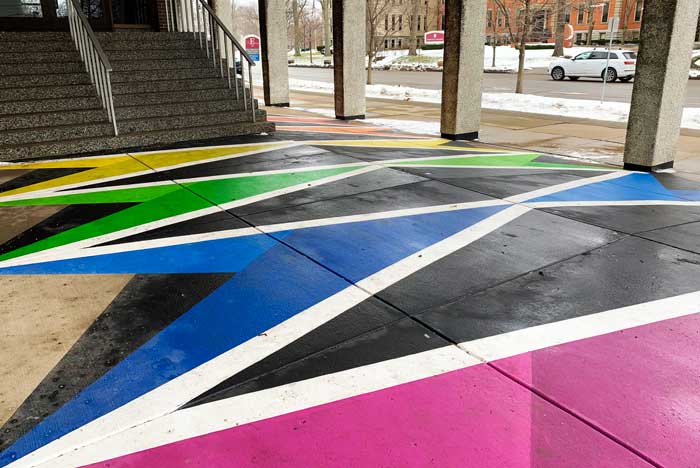 After you’ve stretched your legs and (hopefully) enjoyed some nice weather at Broderick Park, make your way over to Porter Ave, where you’ll find some Casey William Milbrand street art in a bit of an unexpected place.

Created and unveiled last October in celebration of Buffalo’s LGBTQ+ community and the 31st annual National Coming Out Day, “As Is” is a representation of individuality, acceptance, and inclusion that can be seen on the sidewalk in front of D’Youville College’s Student Center. According to Milbrand: “One rainbow color at a time, my mural unfolds like a colorful origami accordion. This mural is about the moment you start accepting yourself as you are.”

From Porter Ave, take a quick drive (or walk!) over to Connecticut Street, where you’ll come up on what appears to be a literal castle. Unfortunately, the Connecticut Street Armory isn’t actually a real castle— though it definitely looks like one.

Located just beyond Prospect Park, this Victorian gem and National Historic Landmark was built back in 1899, but remains fully functional today as home of the 74th Regiment of the New York National Guard. It’s hard to believe something so massive in size lives right here in the heart of Buffalo’s West Side!

A straight shot down Niagara Street through Prospect Park will get you to our next destination: a mural titled “Homeland, Perhaps It Is Because I Wish to See You Fly, That My Flight Continues to Be Yours.” Created and designed by Betsy Casañas as a tribute to Hispanic heritage in Buffalo, this vibrant mural can be found on both the front and side of the building that houses Buffalove Development and Jackson Hewitt Tax Services.

Bonus: Want to explore all of the West Side’s incredible street art? Check out our Complete Guide to Street Art on the West Side. 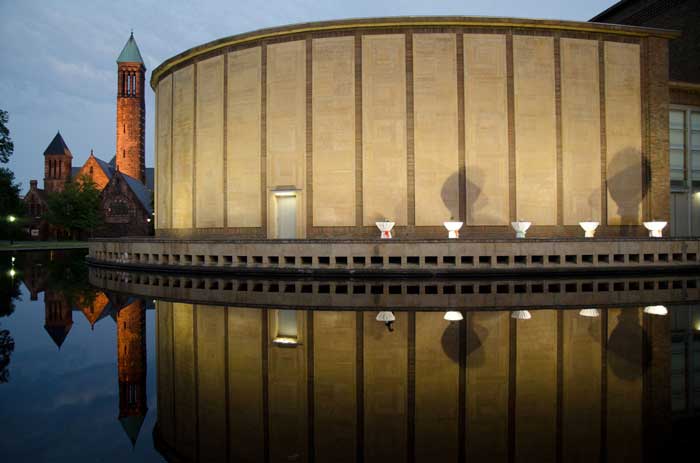 Next up on our driving tour is another one of Buffalo’s National Historic Landmarks and the permanent home of the Buffalo Philharmonic Orchestra: Kleinhans Music Hall. Originally built between 1938 and 1940, the building’s exterior is architecturally significant as it was designed to look like the body of a string instrument, perfectly complementing the curves of the streetscape around it.

It’s a simple, yet beautiful representation of some of Buffalo’s best architecture, and we highly recommend seeing it in person if you haven’t already!

From Symphony Circle, drive down North Street and take a right on Elmwood. On your right will be the Karpeles Manuscript Library Museum, another one of Buffalo’s architectural gems. Featuring massive columns out front and gorgeous Greek-Revival architecture throughout the entire exterior, the Karpeles Manuscript Library Museum isn’t just impressive in appearance— it’s also home to the world’s largest private collection or original manuscripts and documents. While it’s currently closed due to COVID-19, take a virtual tour of the building’s interior and you’ll quickly see for yourself why it’s regarded as one of the city’s most popular wedding and special events venues. 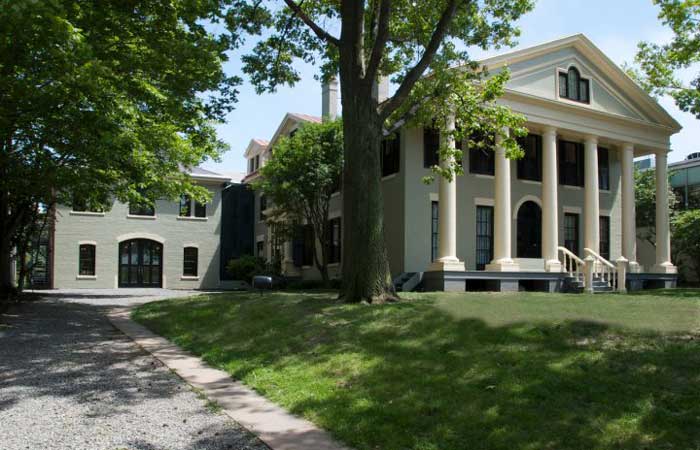 Next, head back up to North Street and hook a right on Delaware Ave to get to our next historic stop, the Theodore Roosevelt Inaugural Site. Following the assassination of President William McKinley in 1901, Theodore Roosevelt took the oath of office here at the Ansley Wilcox House to become the 26th President of the United States.

Today, the site is home to an interactive museum that discusses TR’s lasting impact and features items from the 1901 Pan-American Exposition. Since it’s currently closed, take a virtual tour of the museum online in the meantime, and definitely keep it on your list of must-visit spots post-quarantine.

If you’re local to the area, you probably already know that Allentown is known for being one of the city’s most vibrant, colorful neighborhoods, thanks to local artists and muralists. Continue on Delaware, take a right on Allen, and as you make your way down the street, keep an eye out for these incredible murals that can all be found within a short walk of each other:

Stop 10: Fuel Up Before Heading Home

And with that, our “tour” is complete! Depending on what time of day you started out, it’s likely time to grab lunch or dinner and head home. Consider supporting local businesses by ordering takeout from a nearby restaurant listed below (there are also plenty of other restaurants along Allen to choose from), or find ones on the way home via our guide to restaurants offering takeout all across WNY.

Based in Buffalo, Emily is a marketing professional by day, and a freelance writer by night. She is passionate about uncovering unique stories, and dreams of cross-country road trips, endless sunshine, and adopting multiple dogs.
Find More ➭ Tour By Car Series