There was a time when cultural food experience in Buffalo meant tucking into a Sheppard’s Pie at the Shannon Pub or sitting down at Kuni’s sushi bar…. and that was about it.

Now – with a poutine-based restaurant at one end of Allen Street and an Ethiopian restaurant at the other – gastronomic experiences in Western New York have splintered into a multitude of micro-niches and foreign cuisines.

It’s in this era of a more discerning diner, that Louisiana native Chef James Roberts is opening Toutant – named for his family’s trapping and fishing camp located south of New Orleans.

Say Louisiana food to someone and it might conjure up images of Bourbon Street jambalaya or the massive mound of meat and bread known as The Muffaletta sandwich. However, Roberts recently told me that Toutant isn’t just going to be a French Quarter tourist trap teleported to Buffalo’s now-booming Ellicott Street.

Roberts said Toutant will be focused on delivering us culinary niches from across the entire South and implied that he trusts local diners to take a trip with him to the farmhouses of Alabama, the low-country of the Carolinas and the backwoods of Kentucky.

“We’ll have a few things that are indicative of Louisiana, but we’re going full-on American South,” he said. “So, we’ll have fried chicken, biscuits, a lot of Gulf seafood, some smoked meats and a traditional barbecue offering every week.”

In addition to cooking up Southern fare, Toutant will also feature a range of artisanal bourbons and whiskeys, along with a cocktail list that highlights the best flavors those spirits have to offer.

RELATED: Buffalo’s Rebirth: Make it So at Black Swan

Despite having a focus south of the Mason-Dixon Line, Roberts said sourcing ingredients locally is now “a necessity” for area restaurants and added that Toutant will leverage his personal connections with nearby suppliers to put the freshest ingredients possible on his plates and local craft beers in his glasses.

“Just because it’s local doesn’t mean it’s great,” he noted. “So obviously our first priority is a quality product, prepared with expertise and presented in a way that that the guest can feel comfortable, both in understanding it and recognizing it.” 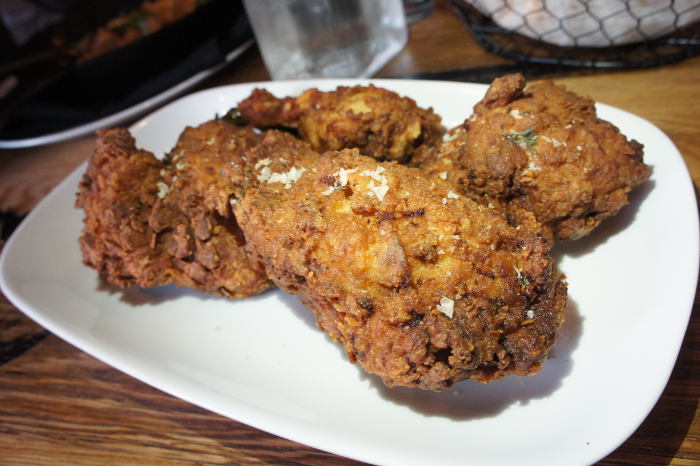 Read between the lines, and you’ll notice that Roberts will be featuring mostly comfort food – and that theme of comfortability extends into all things Toutant: from the way dishes are conceptualized, to the restaurant’s modern yet rustic décor, to the prices and the service.

In our brief chat, Roberts emphasized over and over that he wants his guests to be relaxed and like his family’s bayou retreat, Roberts sees Toutant as a working man’s getaway.

“That’s my big thing,” Roberts told me, his voice suddenly filling with passion. “I don’t want anybody, ever to feel uncomfortable. That’s… that’s the biggest thing for me.”

“So, I try to walk the line right down the middle,” he continued. “You can come in here in a business meeting or a suit. You can come in with your family. Or, come in and just have a beer and a sandwich and it’ll all feel just the same – like a million bucks.”

To help deliver that million-dollar feeling, the Louisiana chef said his service teams were “put through the wringer” all spring with the goal of providing something he sees lacking in Western New York – top-notch service.

“I think that’s the one thing that’s lacking the most in Buffalo: attention to the level of service for the guests and accommodation to their needs on a second-by-second basis,” he said. “We feel like we have the food part down pat… but our service staff and our bar staff is under intensive training to make sure we have incredible levels of service.”

Toutant will be open starting May 14th for dinner Thursday through Monday and Sunday brunch. Reservations can be made using open table through their website. To stay up-to-date on everything happening at Toutant, follow the brand new restaurant on Facebook, Twitter and Instagram.