Toutant Brunch: Nothing but the Best 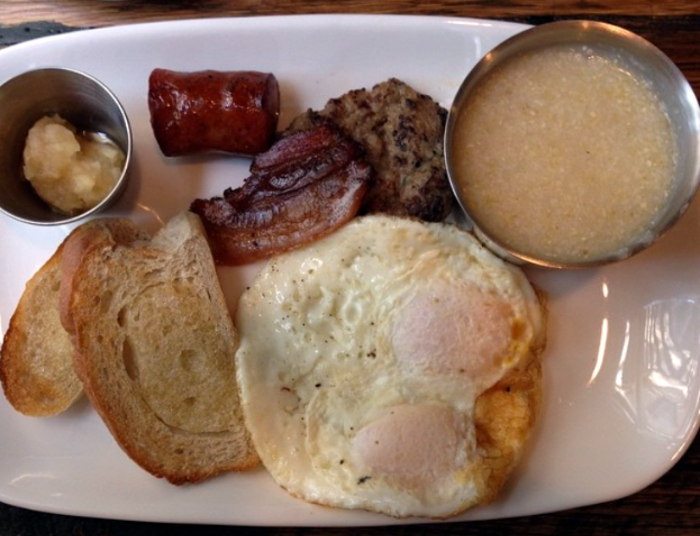 Let’s talk Toutant brunch. Since this temple of southern, grassroots cuisine graced Ellicott Street with its presence in May 2015, it’s been the talk of the Buffalo food scene. And their brunch is no exception. Needless to say, I was beyond excited to find out that Toutant was on the SOB list of restaurant brunches yet to be reviewed. Because, if I could, I would go here at least once a month for their Sunday brunch. Alas, one day I may get my wish, but for now, here are the deets on my visit to Toutant for brunch:

There are days you explore, and there are days you play it safe when it comes to what you put in your mouth. On the particular day that I visited Toutant for brunch, I was in dire need of a no-joke, guaranteed delicious, booze-soaking brunch. Lawd, I was still drunk.So we plopped down on bar stools and immediately ordered a Lobster Caesar (delicious), the ‘Uncle Mo’ which combines the flavors of bourbon, pistachio, lime, creme de peche, egg white, nutmeg and absinthe into one creamy, nutty, boozy cocktail, and a cinnamon roll. Note: ‘Uncle Mo’ isn’t a brunch cocktail, but Toutant is cool and lets people do what they want, within reason. 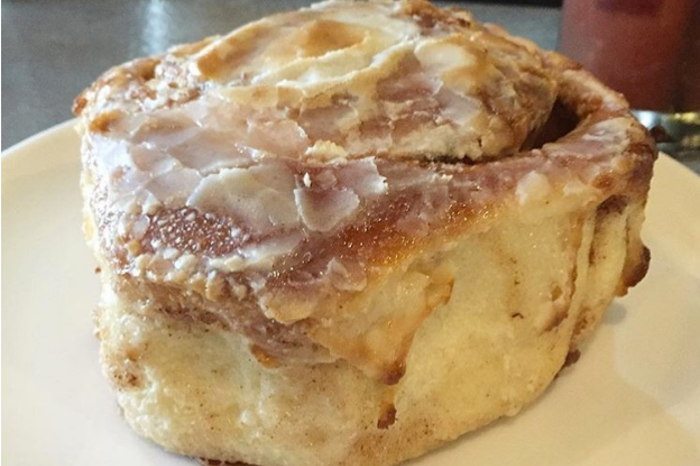 First things first. The cinnamon roll. Anyone that knows me well knows that there are two types of sweets that I can’t resist: cinnamon rolls and almond croissants. Since Chef James Roberts has been putting out his homemade baked goods for brunch, and rotating the cinnamon roll, this has been my Sunday morning ritual upon opening my eyes. You should adopt it and live by it.

Guys, this was THE day! I was finally going to become one with the Toutant cinnamon roll. And that I did. I put those layers inside of me with pure delight, and it was just as glorious as I had imagined. How’s that for #foodporn?
Anyway, that’s my bit about the cinnamon roll. You must try it. Onto the savory stuff. 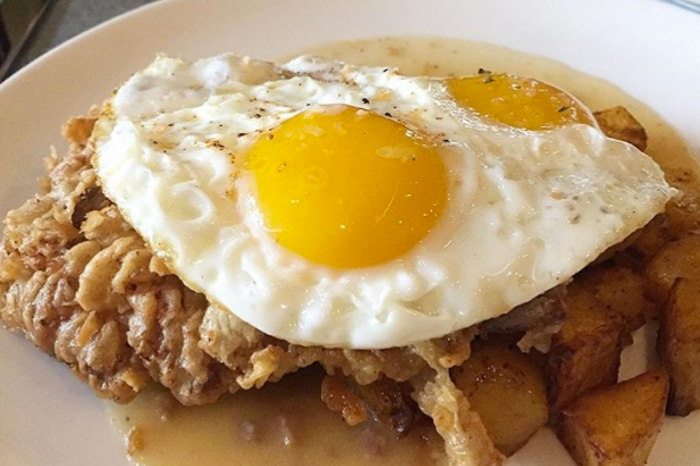 To reiterate, I was not joking around. I ordered the chicken fried steak with no regrets, and Rob ordered the barbecue hash featuring brisket. Win-win. The chicken fried steak was… drum roll… awesome! The steak was tender and juicy, the fried coating added the perfect crunchy texture without being too greasy, and the gravy was of the perfect texture and consistency to dredge my forkfuls into. Of course there were two perfectly cooked sunny-side up eggs and crispy hash browns to accompany the dish, so it was everything I needed and more. 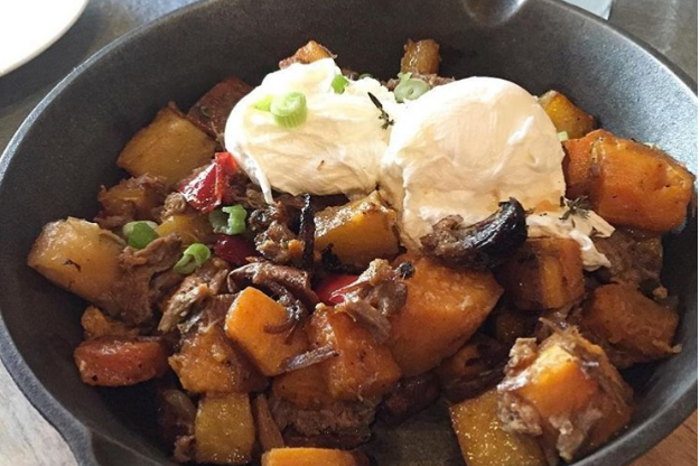 The barbecue hash was equally mouthwatering. The bits and shreds of salty, smoky, tender brisket were tossed in with white and sweet potatoes, sautéed peppers and onions, and topped with two poached eggs. A rightful brunch medley if I do say so myself. Our second round of drinks included a gin gimlet and  jazz hands – a mimosa with a hit of campari to add a bitter edge to the sweetness. It’s perfect and I’ve already written about it in 5 Brunch Cocktails to Indulge in This Weekend. The gimlet is another drink that’s not on the brunch menu, but if you like gimlets you know there’s nothing quite as revitalizing on a hot, humid day in WNY. And you better believe the Toutant bartenders know how to whip up the perfect gimlet. 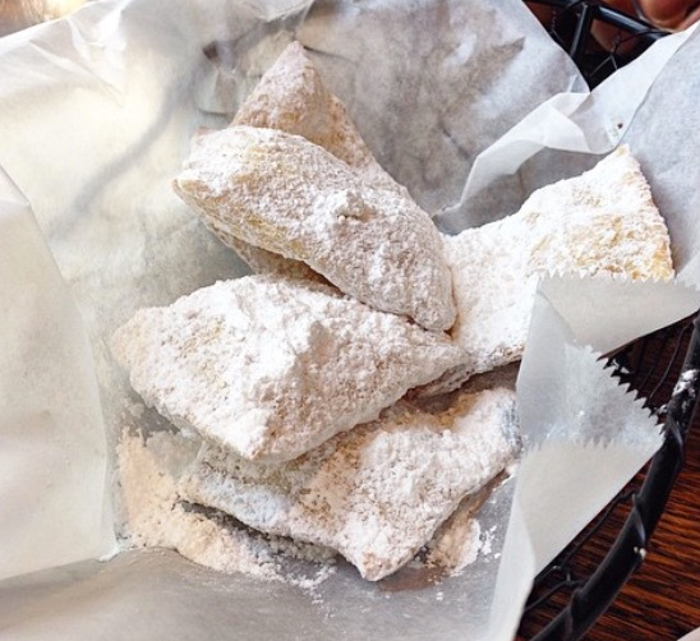 On prior brunch trips to Toutant, I have had the pleasure of indulging in the ‘Breakfast Royale’, the omelette, beignets, and biscuits. The Breakfast Royale is a breakfast platter made up of two sunny-side eggs, house sausage, bacon, grits, taters, homemade toast and preserves, and the omelette changes weekly based on which veggies are in season. You will leave with an exceptionally happy belly having put either of these meals into it. The beignets are light, powdery and exactly as you imagine them to be in NOLA. Take yourself there. Oh, and the biscuits? They’re on all of their menus, so, you have no excuses, and at this point in the article you don’t need me to tell you that they are everything you want a biscuit to be. 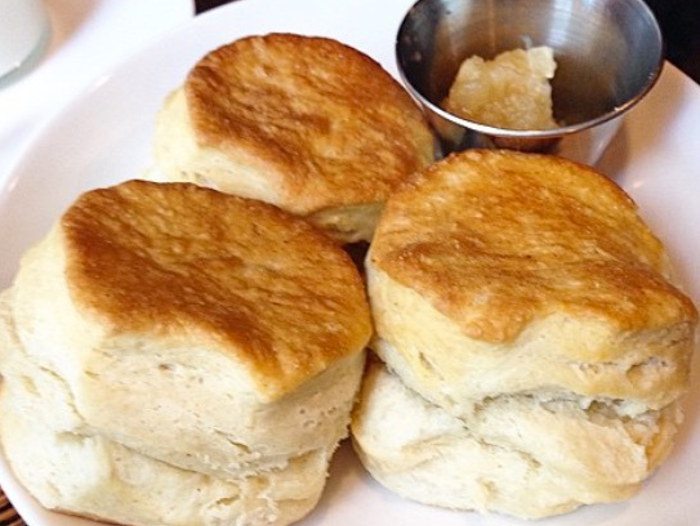 To conclude, go to Toutant. At noon on Sunday, 10pm on Monday, 6pm on Thursday, midnight on Friday. Whenever. Just go. The atmosphere, food, drinks and service will not let you down. 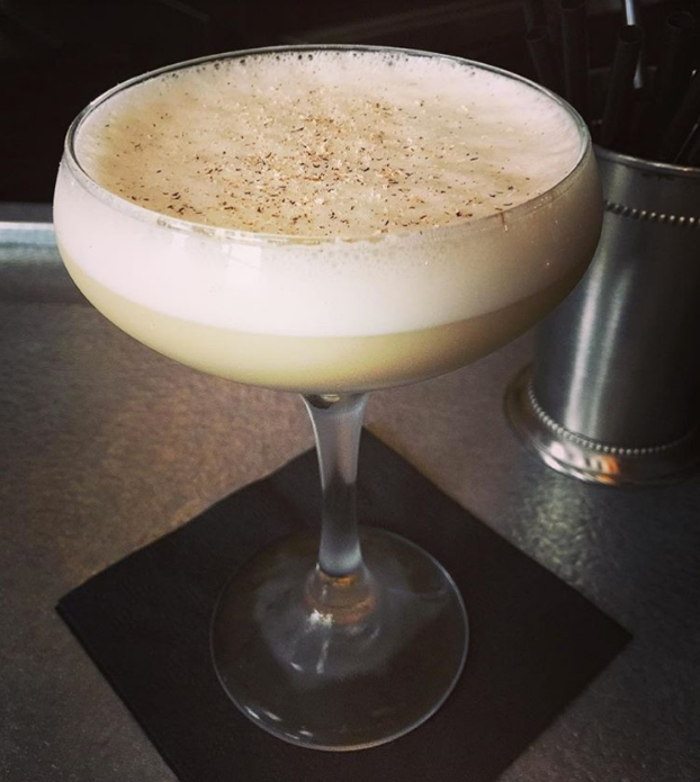 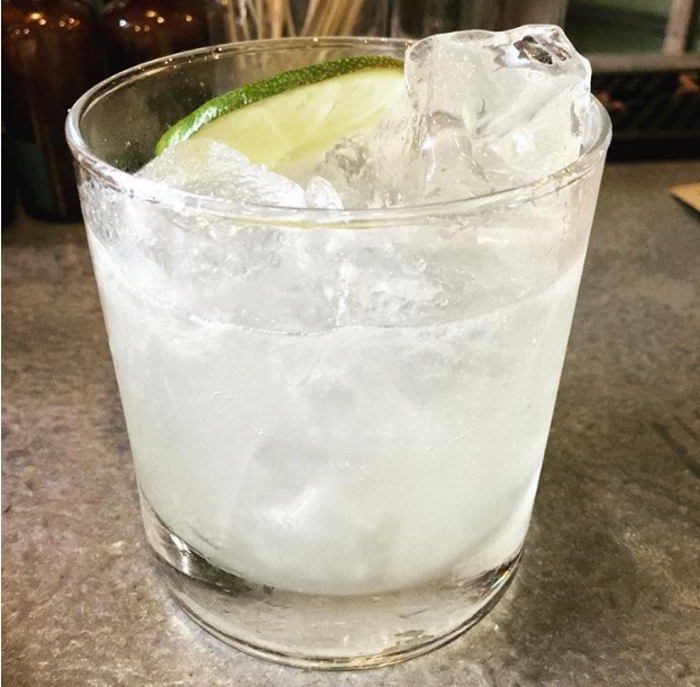 Adrianne is the face behind the @buffalobrunch Instagram and she's enthusiastic about the up-and-coming food and drink scene in Buffalo. When she's not brunching or writing about it you can find her behind the pine at Ballyhoo. Adrianne enjoys yoga, cycling, and snowboarding to work off all of the Bloody Marys and pancakes.
Find More ➭ Best Brunch, Sunday Brunch
×