Chef James Roberts opened Toutant in mid-May after several months of remodeling and the typical, longer than usual, “when is it going to open?” period. He has been a highly regarded Head Chef at Park Country Club since 2007, originating from St. Bernard Parish, Louisiana just outside of New Orleans.

Toutant is named after Robert’s great grandfather’s trapping and fishing camp in the South Louisiana marshland. They offer contemporary country cuisine focusing on quality and seasonal ingredients influenced by the American South. This is NOT A barbecue joint, but they will offer a BBQ of the week option. And yes, “when they’re out, they’re out”. As is the norm with top chefs anywhere Chef Robert’s takes full advantage of local farm products when available.

If we gave stars, and we don’t, but maybe we should (what do you think?) this would be a 10. Admittedly, I’m a big fan of the south, the food and even the attitude, unless I’m waiting in a real slow line, but I digress. I know it’s early, but in my opinion Toutant is among the best restaurants in the city, joining the Buffalo stalwarts and a few 2014 startups, shuffling in what we hope is a new era in WNY. The focus here is food, just one of the things I love about this place. Toutant fills a southern cuisine niche that has been lacking here, one of the few left.

As mentioned the food here is southern influence. The foundation of southern food stems from influences that include French, Spanish, South American and African, to name a few. In recent years the food scene in the south, while based in tradition, has become tremendously creative and progressive. Toutant is much more than a restaurant that serves fried chicken. Southern is an attitude and the food is an extension of that – slow food, slow life, enjoy the family, smell the roses, sip on bourbon. The best food takes time to prepare. There is no substitute.

Toutant has an excellent beer list, local and other, far superior than anything you’ll find down south. They also have an abundance of whiskeys much like what you’d find down south. I noticed they have a Sazerac on the drink list. A New Orleans favorite I didn’t get a chance to sample it but I’ll definitely catch it ion the next run.

We were eager to try the food we’ve heard much about. It was Thursday, their “official” first night open to the public and the place was busy. Normally we’d wait for a place to get their duck breasts in a row, but we told ourselves we were ethically bound to sample the food and the ducks lined up so well we figured we’d tell you all about it.

Toutant is three stories. The bar area occupying the first floor with dining on 2 and 3. The dress and atmosphere is casual, comfortable and relaxed. We were shown to our table immediately, reluctantly dragged from the bar that looked like it had plenty of good stuff. 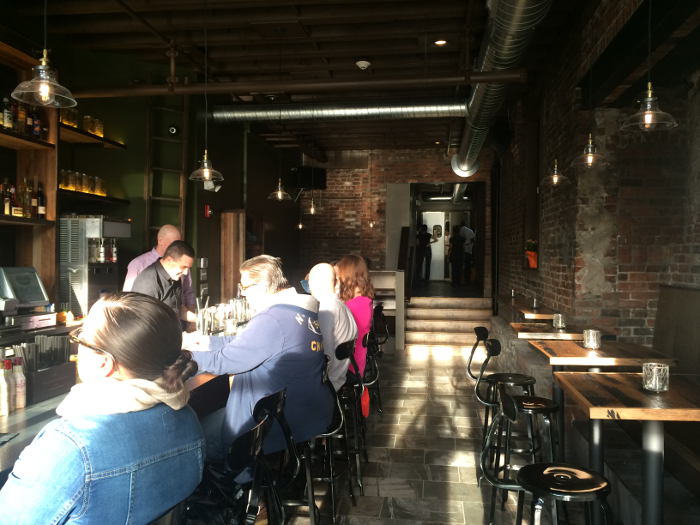 It was an easy climb to the third floor with a hint of varnish still in the air. The place is a lot of brick and more wood covering floors, bare tables and seating. The view from the top is nice overlooking a setting sun and Main Place market, the Hyatt etc. The windows were bare this night and although the sunset was beautiful depending on where you sat it could also be blinding.

Chef Robert’s has proclaimed his desire to make the service at Toutant superior and even on opening night it was an impressively well orchestrated group offering water, drinks and a solid knowledge of the cuisine.

For cocktails we ordered and loved: 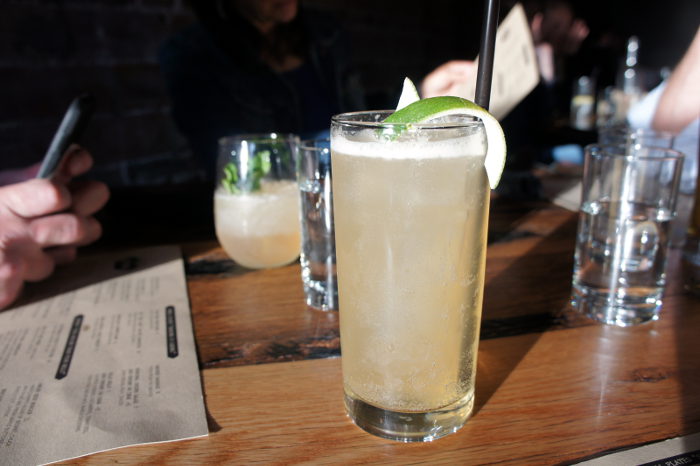 For dinner we ordered:

These are one of the great mysteries of the 21st century. Nothing but air with a little somethin’ yet a rush of flavor that is seemingly impossible. Flavored air? Damn these are good.

Blue Crab Bisque – crab cracklin, bay cayenne oil, $8
A bowl of crab bisque as good as they come. Thick, seafoodie and delicious. They do the cool thing where they serve you a bowl of the good stuff and then pour the liquid in at the table.
Hush Puppies – “they won’t stop barkin”, $8

These are a daily variation. Ours included Jalapeno peppers and brisket crisp ends in the batter with a house made Ranch for dipping, which doesn’t do it justice.

Argued by one as the favorite of the evening and that person didn’t even like hush puppies. Yes, the best hush puppies we’ve eaten.

This is again a seasonal/daily variation. We found this on the “Features” menu and are glad we did. Thankfully someone went the healthy route (which doesn’t happen often around here, we know). Light, unique, excellent dressing.

Argued by many as the favorite of the evening. F**^#$@# stupid good. The biscuits are the light and lusciousness of your dreams, the gravy plays a supporting role to the biscuit – a light partner in heavenly flavor, not the typical over baring envious co-star. The egg is gravy… the add-on that may not be necessary but lifts the show into the category of “I’d eat this every day for the rest of my life”. 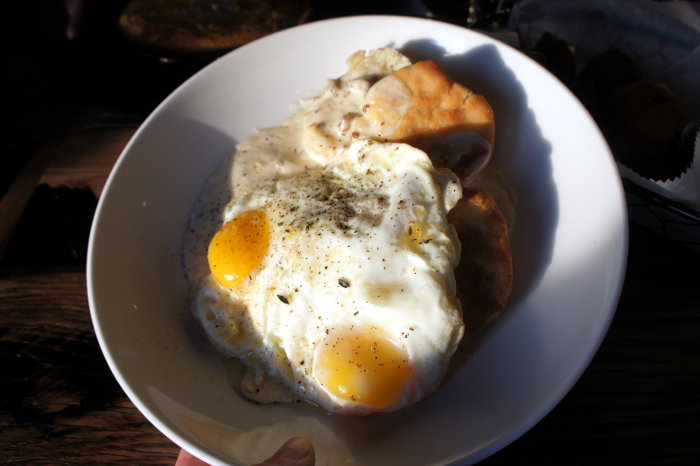 Corn bread is better baked in a skillet. I’m pretty sure that is a fact – not sure why anyone would make it any other way. This stuff comes fresh out of the oven and is as moist and corny as anything you’ll try.

I’m guessing this might be made with the baked in-house buttermilk roll. Whatever – it was perfect. The toppings were crisp and fresh, the shrimp just right. This wasn’t the star of the show but still very good.

Easily the best fried chicken I have ever tasted. Not only was the skin crisp, and crunchy with a nice scald on it, the chicken itself was full flavored and juicy to the last bite. I’ll be hard pressed not to order this every time I go.

We opted for the sausage that added a great smokiness. The veggies in the stew were firm and delicious as well.

If you like fried dough at the fair you’ll love these. Lighter and better than what I’ve tried in Nawleans and that includes Cafe Du Mond.

HOLY COW! This is up there with the Sticky Toffee Pudding at Black Sheep for my favorite dessert ever. 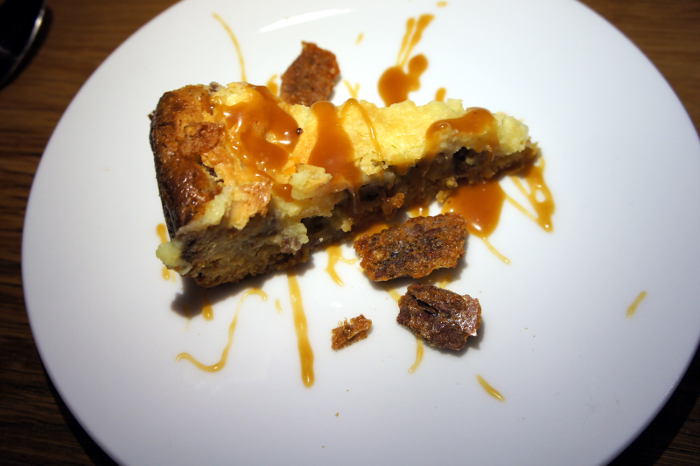 This was very good, although a little tart for some at the table. I’m afraid the spotlight was stolen by Oooey Goooey.