Where to Watch: Pacquaio – Mayweather 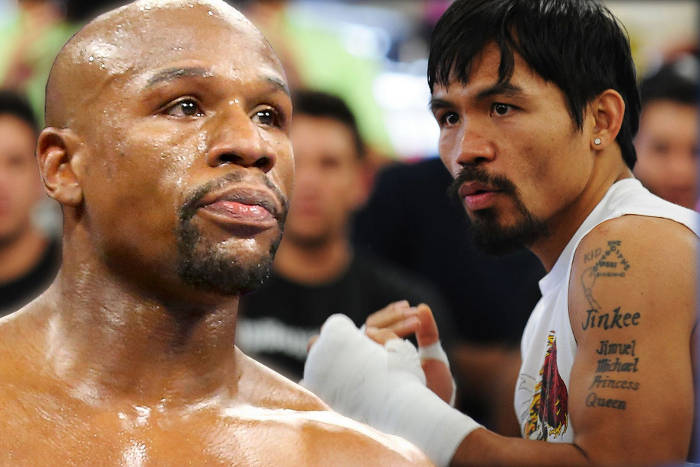 If you’ve ever had a passing thought about Don Draper as your personal role model, Saturday May 2 is the day for you, as two events that held major importance to our grandparents are taking place – The Kentucky Derby and “The Big Fight.”

The Derby comes around every year and can be seen almost anywhere. On the other hand, the fight between Manny “Pac-Man” Pacquiao and Floyd “Money” Mayweather Jr. is a singular event that you just might want to pick up some stogies and roll out of the house to catch.

There was a time when boxing was on broadcast TV and every corner bar would have a big fight blaring in black-and-white from a tiny nicotine-stained box perched high in the corner of the barroom. Unfortunately, those days are over and with the fight costing bars and restaurants thousands of dollars to show – only a handful of places in Western New York are willing to bet that they can recoup their initial investment.

In a recent phone interview, Tim Klentos, owner of The Warehouse, said that businesses are being charged $3,500 for every 100 people a viewing venue can hold. It’s the reason The Warehouse is partitioning off its bar just for the fight – to limit its capacity and fight fee.

As for the fight itself, Pacquiao – Mayweather sees the undefeated American Mayweather (47-0) go up against Pacquiao (57-5-2), the Filipino many were predicting a few years back could give Mayweather a run for his money. The problem is – those predictions were made a few years ago. Since then, Pacquiao has suffered some significant defeats. The fight should have been held years ago, but negotiations to make it happen derailed several times.

Going into the fight, Pacquiao is seen as the “People’s Champion” of his native Philippines. With his aggressive style and up-beat personality, Pacquiao’s appeal has also stretched far beyond the tiny Pacific island nation.

Mayweather, on the other hand, is seen by many as a cold and calculating tactician. A student of the game, Mayweather’s unblemished record is seen to be as much a product of his brilliant defensive style, as it is his apparent skill for cherry-picking beatable opponents.

Whether you’re #TeamPacMan (like me) or #TeamMayweather going in, everyone agrees that this fight should have been held three or four years ago when both men were closer to their prime. However, much like the fight’s availability, we have to settle for what we got – and that still looks to be a pretty great night out.

Most places I talked to said they are taking reservations, and those reservations are filling up fast, so call or plan ahead.

I’m not sure where I’m going just yet, but as someone who’s part Filipino – I will be accepting shots on Manny’s behalf. Just so you know.

Cover gets you two drink tickets

If you know of any other good spots to catch the fight please drop us a line.