Why Everyone in Buffalo Should Own a Bloody Hollies Record 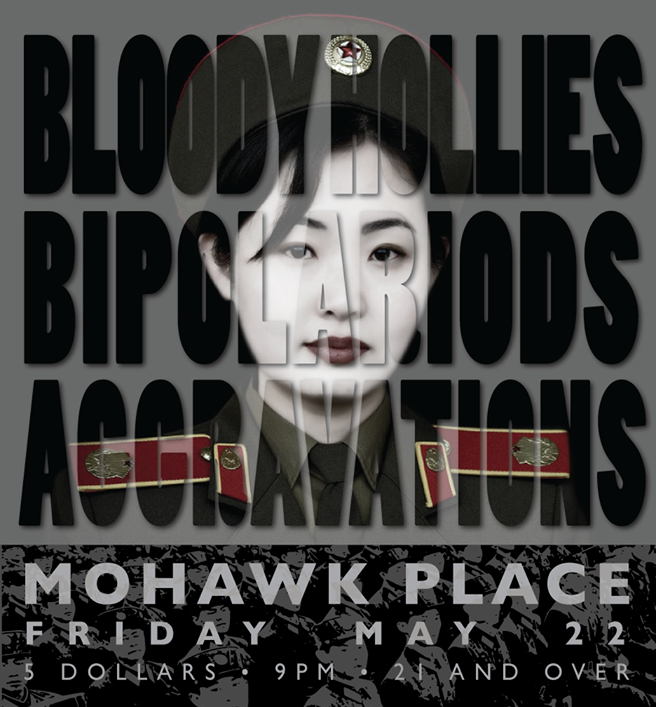 “Two parts rockabilly, three parts punk, with a generous helping of old fashioned animalistic caterwauling, the self-described ‘button-down licentious sounds’ of The Bloody Hollies are not for the weak of heart—but the weak of heart never lasted very long in rock ‘n’ roll, anyway,” Kate Racculia wrote in 2002 for UB’s campus paper about the Bloody Hollies’ debut album Got It Where It Counts!

Despite years on the road and a rotating cast of musicians around frontman Wesley Doyle, that 2002 description still applies today.

Starting in April 2000, the Bloody Hollies were a sort of ‘little steam engine that could’’ of the local Buffalo music scene. Not as hip as The Irving Klaws, not a visceral as The Tyrades and not as popular as girlpope – the Bloody Hollies were just three art school students from the University at Buffalo stumbling onto the same catchy, riffy formula being honed at the other end of Lake Erie around the same time by another little band called the White Stripes.

Thanks to the strength of Got It and the post-9/11 garage rock explosion, the Bloody Hollies started turning heads outside of Western New York and buzz in Buffalo’s tight-knit garage rock community began to swell when word got out that the band was getting a serious look from Sire Records’ Seymour Stein, the music industry legend who’s signed household names like Madonna, the Talking Heads and Ice-T.

While that Sire Records deal never materialized, the band’s second album Fire at Will (2003) was picked up and released by Sympathy for the Record Industry, the same label that released the White Stripes first album. Three more records and countless international tours, later and the band is still a part of the larger garage rock conversation with a loyal following in both the US and Europe.

In fact, on a 2006 trip to London’s legendary Dirty Water club to see a band called The Horrors – I actually handed the bouncer my passport as the Bloody Hollies’ “Infatuation of the Girl” boomed over the PA system. Maybe the Brits knew Buffalo was in the house…

It’s been 15 years since Doyle and company started gracing the Mohawk Place stage and in the intervening years, the band has shifted from its early rockabilly roots to a more muscular punk and hard rock sound. The addition of a second guitar a few years back thickened out the overall sound and with the latest record, 2011’s Yours Until the Bitter End, the Hollies have fully embraced a sound that wouldn’t feel out of place next to Foo Fighters, the Black Keys or AC/DC.

Despite all the changes, Doyle’s songwriting remains at the core of everything the Bloody Hollies do and his decade-and-a-half track record speaks for itself. On Friday, the Hollies come back to Buffalo having made the transition from band supported by locals “in the know” to an international band that everybody in Buffalo should know.

With all due respect to the Goo Goo Dolls, this reporter considers the Bloody Hollies the true ambassadors of blue collar Buffalo rock-and-roll. So go out on Friday night, buy a few drinks, dance your ass off and pick up a record. Cause in Buffalo – we know how to support our own; especially when they’re this good.

The Bloody Hollies w/ BiPolaroids, Aggravations, and the Soft Love

For updates on the best things to eat, drink & do in WNY, sign up for our eNewsletter!
[mc4wp_form]