Worth the Wakeup: Explore the Waterfront with Elevator Alley Kayak

Lifestyle, Things to Do

Buffalo is changing before our very eyes.
If you need convincing, I suggest a tour down the Buffalo River with an Elevator Alley Kayak.
In a partnership with Explore Buffalo, Elevator Alley Kayak offers guided tours from the Old First Ward downriver to the Buffalo Lighthouse. It’s a trip not just from one part of Buffalo’s waterfront to another – it’s a trip through time, from the days when grain was loaded by hand to the latest build by Carl Paladino’s Ellicott Development Company.

It’s a cool Sunday morning, with the sun just starting to creep over the rooftops of the Old First Ward. Our bleary-eyed tour group of about a dozen or so is meeting up next to an old barrel factory on Vandalia Street. Like a lot of the sights we’d be seeing that day, the Barrel Factory is current in the middle of renovations – being converted into a multi-use facility that already houses Elevator Alley Kayak’s retail store.
Opening in July, the retail store will feature kayaks, stand-up paddle boards, paddles and life vests. The store will also feature trip essentials like sunscreen, hats, water and snacks.
After a bit of basic paddling, launching and safety instruction, we’re portaging a couple of kayaks down to the municipal launch, and slipping our boats into the cool morning water, one-by-one.

It’s a bit brisk, but Jason Mendola, the company’s co-owner tells us, “You’ll warm up once we’re moving.”
After everyone is in the water and has a bit of practice scooting around, we’re herded together and directed into the heart of Elevator Alley, right next to Silo City. The scents of algae, concrete and rust swirl around us and rusting re-bars reach out from concrete as our tour guide Margaret Logan points out how grain from the MidWest was loaded off cargo ships – first by hand and conveyer, then by vacuum – and into the grain silos.
Margaret talks about how many Irish immigrants moved into the Old First Ward to work at the silos. She adds that many of these workers lost their jobs when the mechanical vacuum systems were implemented.
On the way out of Elevator Alley, we pass a handful of aging graffiti murals that serve as reminders of the not-too-distant past, before the city’s current resurgence, when this part of Buffalo was a desolate haven for graffiti artists, drug users, urban explorers, homeless, photographers and the occasional underground rave. Today, Silo City regularly hosts large family-friendly concert events, while the adjacent river has become a hotspot for boaters.

After passing under the Ohio Street Bridge and making the turn toward downtown, the view on the river opens up. The skyline is clearly visible, with the back of the ballpark’s scoreboard sitting front and center. In fact, Elevator Alley has night tours scheduled to coincide with the setting off of fireworks from the Bisons’ Fridaynightbash!
If you follow the latest Buffalo real estate development news, you probably know the section of the Buffalo River between the Old First Ward and the Cobblestone District is currently a hive of activity. Just past the Ohio Street Bridge, an $18-million Samuel Savarino development is starting to rise. Across from Riverworks, Ellicott Development Company’s 301 Ohio Street building is looking close to wrapping up its primary construction phase.
The sights of these new builds snap you forward in time at a dizzying pace with the realization that this kayak tour will slowly be changing from a historical tour to through a forgotten part of Buffalo, into a neighborhood tour through a hot real estate tract.
It’s all the more reason to take this tour now. 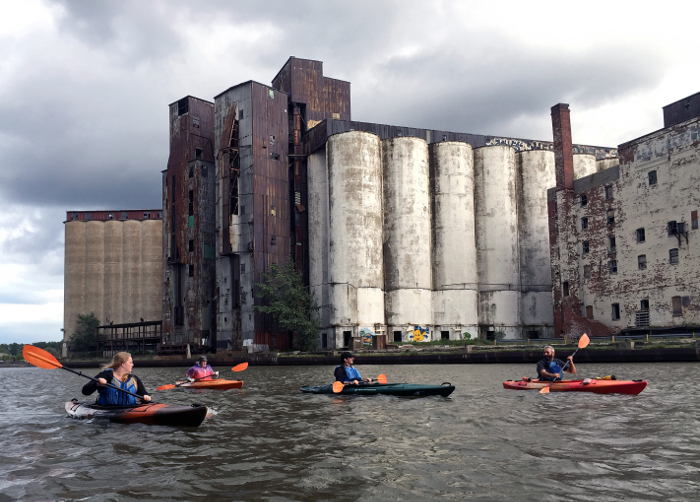 Margaret tells us the canals that led into this stretch of river, specifically the Ohio Basin that is now Father Conway Park, was filled in due to problems with sewage and other waste that was routinely dumped into the river during the late 19th and early 20th centuries. The disease-causing waste was making its way too close to residential areas, and disused buildings were demolished in order to fill in the river. Tragically, Margaret tells us, this likely includes the iconic Larkin Administration Building, one of Frank Lloyd Wright’s lost architectural classics.
Beyond Riverworks, we float past the E.M. Cotter fireboat and bemused General Mills workers out on their lunch breaks. It’s at this point that I begin to notice: As we progress down the river, as we move forward in time, the winds get stronger, the current pushes harder.
The booming public address system lets us know that Canalside is hosting a hospice walk today. Pastel-colored flags flap in the breeze as crowds in athletic gear stream across the Canalside foot bridges. I’d never seen this part of the waterfront from the water and it looks even more festive and inviting from the wet seat of a kayak.
The last part of the Elevator Alley kayak tour takes you alongside the USS The Sullivans and down to the Buffalo Lighthouse. This is also the part of the tour where you can expect the most boat traffic. Tour boats, a Coast Guard cutter, sailboats, motorboats, a dozen other kayakers all streamed past us, creating varying sizes of wakes that you are forced to navigate.
Heading back to the Old First Ward, you get to appreciate all the tour’s sights again, and doing so in reverse, the waters get calmer, the winds die down, the traffic decreases and your surroundings get quieter.
If the first half of your trip is about anticipation, the second half is a Zen meditation on all things Buffalo.

In addition to Saturday and Sunday morning tours, Elevator Alley Kayak will also be offering Friday night tours. When there are fireworks at Bisons Games Fridaynightbash!, the tour pauses to take in the pyrotechnics. When the Bisons aren’t playing, couples can take advantage of a “Romance on the Water” special. Friday night tours always culminate with a pint at Gene McCarthy’s.
Elevator Alley will also be offering tours on occasional Tuesdays, with special guides from either the Audubon Society or the WNY Land Conservancy. These tours head toward Tift Nature Preserve, rather than Canalside.
If you’re interested in getting into kayaking or need kayak supplies, Elevator Alley also has a store and retail location in the Barrel Factory where you can get most anything you need.